A Tale of Two Cable Glides

Last week I did a post about Super Grover's Cable Glide but something just wasn't right.

It's hard to find information on these old rides so it was a combination of old newspaper articles, stills from YouTube videos and fuzzy recollections (from 30 years ago) that were assembled into a description of the ride.

Multiple newspaper descriptions described it as a zip line that went "across a 120' valley."

But these pictures showed a much smaller valley: 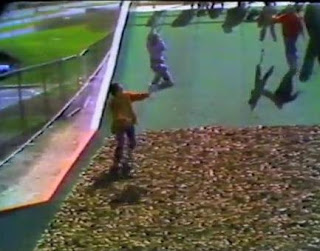 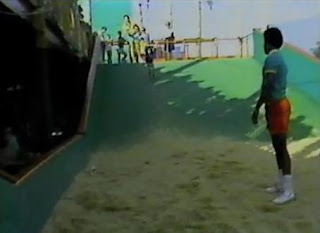 After the post went up a reader named Jason commented:


This is what I've been waiting for you to dig up. This ride is the #1 memory I have from the park probably because Super Grover was my favorite character.

I am fairly certain that the original version of the ride had four sets of ropes. Two in the lower valley course, which you have pictures of, and two in a different higher course that launched from a deck but had a ramp on the opposite end. You can see this second version briefly at the 4:00 mark in this video
http://www.youtube.com/watch?v=Nuskb8fEuNE
From that video it looks like they were next to each other. In all the pictures you have the higher course would be directly behind the camera.


Here is what you see (for about 3 seconds) in the video he mentions: 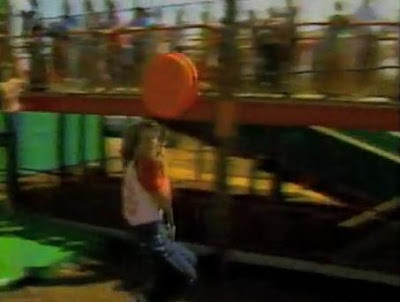 Now THAT looks more like the 120' valley that was described... but then, what was this attraction?

Was this just a smaller version of the same ride located next to the "big kids" version? I'm determined to find out.

Sure, it's trivial... but isn't that what the internet is all about?
Posted by Guy Hutchinson at 9:18 AM