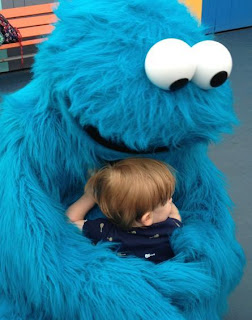 Below are a few interesting stories from the past where costumed characters were being assaulted at Sesame Place. Thankfully, this trend didn't continue.

Cookie Monster Gets Slapped
Associated Press   06.21.01
LANGHORNE, Pennsylvania -- A man's plan to have his young daughter meet the Cookie Monster crumbled when he was arrested for allegedly assaulting the furry blue Sesame Street character.
Police say Lee P. McPhatter, upset that the Cookie Monster would not pose for a picture at the Sesame Place theme park, shoved and kicked the employee inside the costume. McPhatter, 22, of Waldorf, Md., denies the allegations.

"People started yelling at me that I should be ashamed of myself for hitting Cookie Monster. I did not kick or punch Cookie Monster. The cop did not want to hear my side of the story, and I got arrested," said McPhatter, who described the character as his 3-year-old daughter Mina's favorite.

Middletown police said that 21-year-old Jennie McNelis suffered bruised ribs and a cervical sprain when McPhatter shoved her to the ground, then kicked her in the head and back.

McNelis, who is back at work, said she is not permitted to discuss the incident. Sesame Street spokeswoman Audrey Shapiro confirmed that the incident took place, but called it a rare event.
"Our characters do not act the way this man said," she continued. "It is an honor to be Cookie Monster."
McPhatter is free on $20,000 unsecured bail following the June 9 incident. He said he would fight the charges, which include simple assault, harassment and disorderly conduct.

"Why would someone take their 3-year-old daughter to the park and attack Cookie Monster?" he asked. "I would never do that in front of my daughter.

DOYLESTOWN, Pennsylvania (AP) -- A man who kicked, punched and knocked down a theme park worker dressed as Cookie Monster because she wouldn't pose with his 3-year-old daughter was sentenced to a year of probation.

Lee P. McPhatter Jr., 22, of Waldorf, Maryland, was convicted Wednesday by a judge of simple assault, disorderly conduct and harassment. He also was ordered to take an anger-management class.

Police said McPhatter flew into a rage June 9 when the employee at Sesame Place didn't respond to his daughter's request to have her picture taken with the character.

McPhatter, a student at The Citadel military college in South Carolina, called E. Jennie McNelis a "mean Cookie Monster," then punched her through the mouth of the costume, knocking her down, police said.

McPhatter and his girlfriend, Sabrina Quiroz, the child's mother, testified that the 22-year-old theme park worker shoved their daughter several times, flung a paw in McPhatter's face, then tripped.

The 3-year-old, Mina, testified before a judge that "Cookie pushed me in the face."

McPhatter had faced up to two years in prison.


'Sesame' attack
Posted: Wednesday, August 06, 2003
By The Associated Press
A man who became annoyed with a theme-park worker dressed as Telly from "Sesame Street" in Middletown, Pa., shoved an umbrella into the worker's stomach and was cited for disorderly conduct, police said.

The 17-year-old worker complained of minor stomach pain and was taken to a hospital as a precaution, Sgt. Ken Mellus said.

Mellus said Hiram Cruz, of New York City, delivered the poke Friday during a visit to Sesame Place outside Philadelphia because he "felt that Telly was bothering him in some way."

"I don't think he was trying to hurt the kid. He thought the costume had padding," Mellus said.

Cruz was visiting the park with his ex-wife and 3-year-old child, police said. A listed phone number for Hiram Cruz could not be found and he could not be reached for comment Tuesday.

Two years ago, a Maryland man was sentenced to a year's probation after kicking and punching a Sesame Place worker dressed as Cookie Monster because she wouldn't pose with his daughter.

Muppet returns to park after being hit Telly is back on the job after an attack.
August 06, 2003
By Amie Parnes INQUIRER SUBURBAN STAFF


The pear-headed, purplish monster with the big orange nose and goofy voice was back at work yesterday, dancing around and waving at children.

Last week, the Muppet character was not in such a happy place.

Cruz told police that Telly was annoying him, his ex-wife, and their 3-year-old child as they stood near the photo-pickup section of Sesame Place amusement park in Langhorne.


"He said Telly was bothering him," Mellus said.

The teen was taken to the hospital as a precaution after he complained of stomach pain. He was released about an hour later.

"He didn't want to hurt Telly," Mellus said, "or the kid inside. He thought there was lots of padding in the costume."

"No one was hurt," said Audrey Shapiro, a spokeswoman for the theme park. "That's what matters."

Sesame Place characters have found themselves on the defensive before.

A Maryland man was found guilty in November 2001 of simple assault, disorderly conduct and harassment after he punched and kicked a person dressed as Cookie Monster. The man, Lee McPhatter, became enraged when the character would not pose for a picture with his daughter, police said.

McPhatter was sentenced to one year of probation and ordered to take anger-management classes.